Evolution – the lie that’s too big to be true – continues to be derided as little more than an unsubstantiated theory, by many of its detractors.

The message gets communicated in any number of ways, but all are dismissive of evolution.

“Life didn’t just assemble itself out of nothing.”

“Even the scientists claim they don’t really know for sure.”
How it possibly could have happened
– or if that’s how it happened at all.

“Everything in nature suffers from entropy.”
Systems run down, and things naturally fall into disrepair.
Things devolve into chaos; they don’t magically organize themselves.

“How can anyone look at nature, and not see the need for a Creator.”
Evolution couldn’t possibly make anything as intricate as an eye

“Besides, no one can really know for sure – whether or not God exists.”
And that’s actually just part of His divine plan.  Why would anyone behave morally, if there was no God.

“Atheists can’t imagine anything existing, that’s greater than themselves.”
It’s all part of a social agenda, by atheists, to turn us away from God.
They want to turn us into a Godless society.

Of course, there are many more – all assuming that little more is known today, than what was first advanced by Charles Darwin, some 150 years ago – while presuming to have just given sufficient support for their own unsubstantiated religious claims.

But when we look at all of the advances made in every other branch of science and applied technology over the last 150 years – or the last 50 years, or just the last 10 – how could anyone not suppose that the amount of accumulated knowledge behind the science of evolution, hasn’t also progressed at a pace that far outstrips anything remotely dreamed of in Darwin’s day – or even 5 years ago.

Compare your new blue-ray, or mp3 player to an old wind-up Edison Victrola, or to an old 8-track tape player.  Or how does a Classic ’55 Chevy coup, compare to an early Ford Model T – let alone anything you can drive off of a new car lot today?

The fact is, between the geological record, fossil discoveries, embryonic studies, the work of microbiologists, and the DNA evidence, life can be traced back to its earliest beginnings – over a billion years ago – with greater assurance and accuracy, than you can probably trace your own genealogy back just a few hundred years.

Some of the things that scientists now know:

These things are known with the same assurance as the laws of gravity, though scientists are still tweaking their theories of how gravity actually works.

So why, you might ask, is the general public so apparently uninformed about the basic scientific evidence, and the wealth of solid facts that support the truth of evolution?

The biggest reason, is that it has remained completely off limits as course material within our public school systems, for most of the last 150 years – with teachers forbidden to even broach the subject.  And it’s not just that people don’t know.  There are also a good number of folks out there, actively engaged in preventing any further dissemination of this, apparently dangerous information, to anyone – especially school children.

Imagine, for a moment,  if the same taboos existed – as they do in many 3rd-world Muslim countries today – concerning the teaching of our other physical and biological sciences?  We would still be herding goats and riding donkeys, like the folks who first handed us that assembled tome of transcribed oral accounts – ready to vouchsafe its authenticity as not only an accurate historical record, but also as chronicling various social and religious interactions with the God of Abraham.

We can forgive them, for not being able to completely understand the world they lived in.  But for those of us lucky enough to be living in this day and age, such thinking is ridiculously romantic at best, and darkly superstitious at worse.

Fact is, there are a good many religious believers out there, who are actually the ones unwilling to give up the exalted view they hold of themselves.  One of having been singularly created in the image, and by the hand, of a supernatural being – exalted above all other living creatures on earth.

And it’s these same – shall we say – God’s own chosen, who have set themselves up as the anointed protectors of all that is holy.  And so, would deny others even a look at the scientific evidence that, again, would support the proven facts behind their very existence.

Isn’t it time we pulled our collective heads out of the sand, and openly recognized the simple fact of evolution?
–

Chances are, you’ve never received any formal education, concerning the study of evolution, yourself.  Nor had a chance to actually study the overwhelming evidence.

That’s why, for anyone even slightly interested in learning more, I particularly recommend Jerry A. Coyne’s scientific eye-opener, Why Evolution is True, for further reading.  It’s written by a scientist, in layman’s terms, that just about anyone can understand.

The entire subject is more fascinating than anything you could possibly imagine.  And ultimately, more comforting than you would ever guess.  You’ll certainly never again acquiesce to that worn-out lie, “Well, nobody really knows anything for sure …” 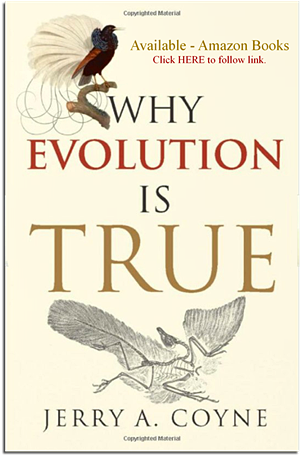 3 thoughts on “Evolution – Putting a lie to rest”