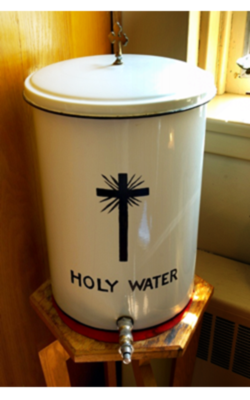 President Obama noted last Thursday, that prayer tends to join people together – in their humanity, and their commonality.  And, as noted in The Salt Lake Tribune, Utahans joined other Americans – all across the land – in a National Day of Prayer.

As an atheist, I can appreciate how God got invented – out of a need to provide a psychological stop-gap, for an overwhelming number of imponderables, at the time.

And I can even appreciate how so many folks, nowadays, eschew the more austere path of science and philosophy – necessary to arrive at an inner knowledge, concerning the truth of the matter, for themselves.

After all, most folks are just as comfortable operating the start button on their computer – without schooling themselves on the underlying digital electronics, Boolean logic, or the binary mathematics behind it.  That, and the fact that the question is simply not as important to many – who often prefer to acquiesce to a socially prevalent ‘default’ belief, in order to move on with other areas of their lives.

But religious belief has its roots in a commonly ingrained error of logic.  Where the very concept of god – much like the edge of space – began as the word for an idea.  But, through superstitious deference and thousands of years of use, the concept has been afforded a presumed actual existence – who’s Name is God.  And with growing numbers of the folks today being increasingly unable to tell fact from fiction, the same kind of accretion of classification – from mere mental imagination, to existing in reality – has taken place with everything from angels to werewolves; ghosts (malevolent and friendly) to Bigfoot and UFOs.

A fundamental error is seldom expelled from philosophy by a single victory. It retreats slowly, defends every inch of ground, and often, after it has been driven from the open country, retains a footing in some remote fastness.  – John Stuart Mill

By merely labeling an idea – and then, through common use and speaking of it as if it were true – it is eventually able to supplant reality, in the minds of many, who come to confuse the mere labeling of the idea, for the ‘name’ given to some actual ‘thing.’

But, in setting themselves against the very idea that there are rational answers to be had, for a rational universe – without a creator-god – ‘believers’ close themselves off to both a higher understanding – and a  higher morality.

For the chance to look out on the universe – and human kind – as equal participants, in having arrived at this station in life.  To give up the naive notion that we are “the protected children of God,” and realize we need slide over and pick up the reins, as protectors and caretakers of this world – and each other.  That it’s time for all of us to come together, to become more spiritually aware and responsible.  And come of age spiritually – as adults.