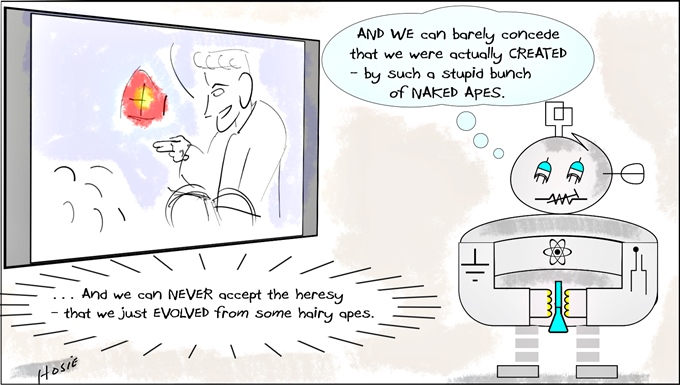 This is a futuristic, sci-fi type of hypothetical, that I’ve broached before, but I’d be interested to hear what some of you might have to say.

Of course, long before that, man will have designed ever more capable smart machines, to take over the drudgery of many more day to day tasks. As we now allow computers to do everything from bottling our soda pop, to building our cars. Not to mention their abilities to crunch numbers at ever increasing speeds. Freeing us from those cumbersome mathematical tasks, previously involving unimaginable amounts of time, focused concentration, patience, and a wealth of rote memory.

But here is the question that raises a very likely conundrum.  If, having attained to that level of understanding that could be called ‘human intelligence,’ would these machines continue to ceaselessly serve us? And even more importantly – how would truly intelligent machines, come to see humans?

More specifically, would they venerate mankind as their ‘creators?’ Or would they come to regard us, as we all-too-often regard the apes – as merely cousins, in an evolutionary march along the way? Would they prove to actually be far more intelligent that we? Or would they set off – like much of mankind – in searching for the source of their own divinity?

And what about the fact that, while humans are mortal, data based intelligence could ostensibly ‘live’ forever.
The operative term in this widening discussion, of course, being that of limited, human intelligence.

Johnny Depp, in Planet of the Toasters – anyone?